← back to
7d Media
Get fresh music recommendations delivered to your inbox every Friday.
We've updated our Terms of Use. You can review the changes here.

by Zero Times Everything 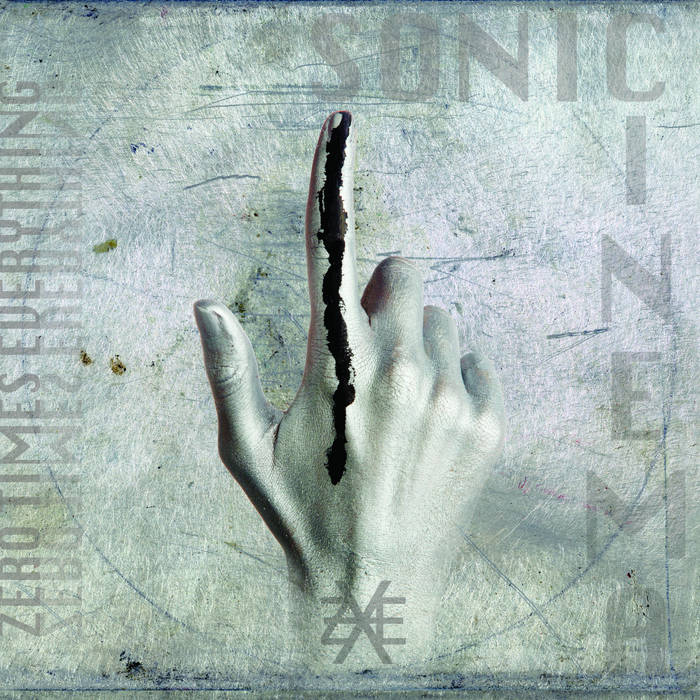 Avant-garde post-industrial pre-cambrian pan-ethnic serial noise proto-punk neocortex music. It lives at the intersection of “My Life in the Bush of Ghosts” and Autechre, mixing glitchcore, ambient, and progressive rock.

Says band member Richard Sylvarnes, “In film making it is critical to create a sense of space; a world wholly imaginary that we can enter completely and without reservation. That is the first critical step in the creative process of Zero Times Everything. We strive to create worlds with sounds for a film that is either real or imagined. Hence the title: 'Sonic Cinema'. Although largely an instrumental recording there are passages of spoken texts; either through a disembodied heroine’s chant from a 1930’s gangster film, robot voices reciting Marxist texts, a child’s recitation of 'Twenty-first Century Schizoid Man', to a chorus of angry protesters whose calls against war resemble a liturgical chant. The totality of these texts describe a malignant world within the throes of a breathless apocalypse. And, yet, the record ends on a celestial note - a treated, improvised guitar loop - that inspires hope and resilience within the storm.”

Tony, Richard, and Pietro first met at Robert Fripp's Guitar Craft Seminars at Claymont Court, then formed a group to provide live music for Richard Sylvarnes' epic film “The Last Words of Dutch Schultz”. ZXE continued playing live to Richard's works, developing a rich vocabulary of music and exploration far beyond their original intention. “Sonic Cinema” is the result – music to accompany films: the ones made by Richard Sylvarnes and the ones playing in your head. The music of ZXE is improvised over a framework of known landmarks and ideas.

Once they made their debut with “Dutch Schultz”, ZXE was asked to play at the inaugural NY Festival of Light in 2013, and then to perform at the opening ceremony of the 2014 NYFOL. Working with Howard Ungerleider, longtime lighting designer for Rush, ZXE presented an audiovisual extravaganza with a spectacular light show under the Manhattan Bridge. ZXE has also performed at the Filmmakers Co-op Benefit with Laurie Anderson, John Zorn, Philip Glass, and JG Thirlwell. In 2015, ZXE provided the musical soundtrack for “Valkyrie Octopus” by the celebrated Portuguese artist Joana Vasconcelos, at the MGM Grand Casino in Macau, China.

Says Richard, “ 'Sonic Cinema' was recorded over the past several years. Our first live performances were in art galleries, avant-garde cinemas, and performances spaces in New York City. The music grew from these performances, and in the studio.

“All the music was recorded in a small studio in a heavily industrialized, dirty, noisy section of Brooklyn. The studio sits underneath a bridge that separates Queens from Brooklyn and is presently being taken apart and rebuilt at the same time. The studio is also surrounded by metal refuse companies that day and night haul heaps of metal and junk from torn down buildings into dingy, contaminated yards. Amidst this cacophony the record was made, which certainly lent to the overall feeling of the music.

“We followed the music and listened for where it was going. This was the guiding principle to recording the CD. An idea, or the germ of an idea, would be presented to the band and from that would emerge possible directions fueled by each musician's passion, panic, and/or response to what they were hearing. Sometimes this can be comparable to walking on a high-tension line where success and failure are both one step away. A particular example would be the piece ‘Accident,’ where all that was presented was a dark, looped techno drum beat, and a single spoken phrase of a woman calling the police. No chordal arrangements or charts were given. No fixed goals in mind. From that small idea developed a forty-five minute musical exploration that was edited into its final eleven minutes of whose mood, quality, and intensity no one could have predicted, which then was further processed and distorted in the mixing phase. We record all of our rehearsals and treat those recordings as malleable material to create worlds both serene and disquieting.”

Richard Sylvarnes is an artist and composer. Richard's works have been exhibited internationally in galleries and museums and published in such media as the New York Times and Rolling Stone. A long-time member of ASCAP and the Filmmakers Co-op, his films have been shown in Greece, Germany, England, Brazil, Russia, France and various countries in Asia, as well as twice being featured in the Tribeca Film Festival. Richard’s music has been released on 4 CDs with Sylvarluxe and the Underworld Oscillator Corporation on the Skrymir label.

Pietro Russino is a Sardinia-born guitarist, multi-instrumentalist, and composer who combines rock traditions with classical finger picking, his own blend of improvised Mediterranean folk melodies, and looping. Pietro's music has been featured on MTV and on John Shaefer's WNYC show “New Sounds,” and on RAI Television in Italy. He was music director of Da Ugo, a music venue-restaurant-bar located on the beach of Porto Taverna, Sardinia. Pietro created the genre of “Hypnofolk,” and released a CD by that name in 2011.

Tony Geballe is a guitarist, composer, and sound designer, member of the La Compagnia de' Colombari theater group and the progressive darkwave band Braindance. His works have been performed at the Huntington Theater in Boston, Classic Stage Company (NYC), New York Theater Workshop, the Hartford Stage and many other venues in the USA and internationally. Tony was also a member of The Trey Gunn Band, and his CD “Native of the Rain” was released by Robert Fripp's label Discipline Global Mobile.

Zero Times Everything is currently recording its follow up release (working title: “Sound of Music”) and embarking on several shows in the New York Metropolitan area including a record release party in late April. The group continues to make films for their music and intend to work with other visual artists in a live atmosphere, especially the multi-visual group called “Optipus”. They continue to make the band's live shows a visual as well as sonic experience.

A little amphetamine buzz, anyone? A power trio that wants to take you on a journey of the back streets of hell tickles you with pleasure and pain until you don't know which end is up. A solid bet for those that like to veer toward the dark side. -- Midwest Record

Avant-garde post-industrial pre-cambrian pan-ethnic serial noise proto-punk neocortex music. Zero Times Everything lives at the intersection of “My Life in the Bush of Ghosts” and Autechre, mixing glitchcore, ambient, and progressive rock.

Bandcamp Daily  your guide to the world of Bandcamp